Success for UCC at the Irish Laboratory Awards 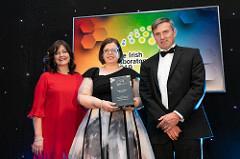 Such tissues are extremely rare and are thus invaluable archives of palaeobiological information. Much of their research relates to fossil colour, including identifying evidence of the original colours of animals such as birds, reptiles, and insects millions of years ago and studying how these evolve through time in different lineages. A related major research strand pertains to the functions of colour – including pigments such as melanin and colours produced by biophotonic nanostructures – and how these functions have evolved through deep time. Another important research topic is the evolution of feathers, which they study via evidence preserved in ancient birds, feathered dinosaurs, and pterosaurs. The group also has led field expeditions to globally important fossil sites preserving soft tissues. 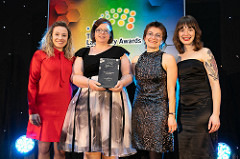 Additionally, Professor Catherine Stanton was awarded 'Laboratory Scientist of the Year' for her research with Teagasc Food Research Centre, Moorepark. In addition to her work with Teagasc, Professor Stanton is also a principal investigator of the APC Microbiome Institute and a Research Professor at UCC.