Professor Barry O’Sullivan, Director of Insight at UCC, has been elected as Deputy President of the European Association for Artificial Intelligence (EurAI) at its General Assembly held in The Hague.

Professor O’Sullivan, who became the first Irish member of the EurAI board after being elected in 2014, said: “It’s a huge honour to be the first Irish person to serve on the board of the European Association for Artificial Intelligence, so to be elected as its deputy president is a major thrill.” 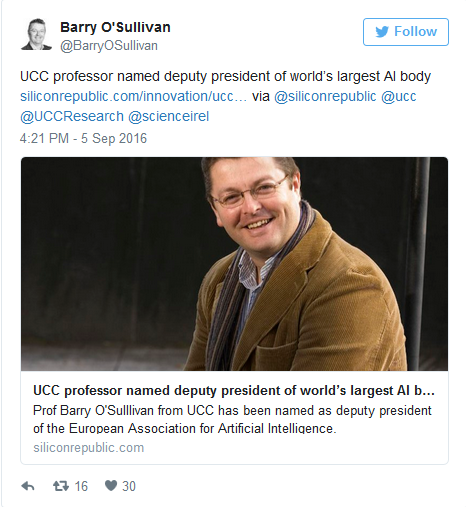 EurAI, formerly ECCAI, was established in July 1982 as a representative body for the European artificial intelligence community. Its aim is to promote the study, research and application of Artificial Intelligence in Europe. EurAI has more than 4500 members across more than 30 countries, making it the largest AI organisation in the world. The primary objective of the association is to promote research in and the study of artificial intelligence, in addition to representing the AI community externally.

Professor O'Sullivan commented: "The Association needs to step up its game in terms of how it represents the artificial intelligence community in Europe. For example, we need to actively contribute to and inform the ongoing debate about the future impact of AI, the responsibilities that the technology brings with it, and the many ethical issues that it raises.

"We also need to engage very directly with European policy-makers so that the quiet position of strength that Europe has in AI is developed and exploited to the benefit of its citizens. For example, there are huge opportunities for major corporate investment in AI-focused industrial R&D labs in Europe, which we are currently missing. EurAI has a role to play in creating an awareness of the consequences of not fully benefitting from Europe’s strength in artificial intelligence."

EurAI currently organises, jointly with one of its member associations, the European Conference on Artificial Intelligence (ECAI), the leading conference in the field in Europe. It also organises the Advanced Course on AI (ACAI), a specialised course in artificial intelligence. EurAI is committed to establishing a greater profile within Europe amongst policy-makers, industry, and the media for artificial intelligence and the quality of the European AI community.