Professor John O’Halloran, Deputy President and Registrar UCC attended Future University in Egypt (FUE) as honorary speaker at the inaugural graduation ceremony of the graduates of the new pharmacy degree that was established under the 2014 FUE-UCC Cooperation agreement.

The official graduation of the first cohort of the new BSc Pharmacy degree was held at FUE on 22nd September 2019. Professor John O’Halloran was invited to speak at the graduation to mark the significant contribution UCC has made to enhancing the quality of the new pharmacy degree at FUE. Addressing the new graduates, Professor O’Halloran highlighted the positive benefits of international collaboration in university degrees and its role in enhancing student learning, advancing best practice in academic curricula and improving graduate employability. He congratulated the students on their academic achievements, and also congratulated the staff at both FUE and UCC who have jointly developed and delivered this new pharmacy curriculum. In particular, he highlighted the key role that Professor Stephen Byrne and Dr. Brendan Griffin played in leading this collaboration from UCC’s side and also acknowledged all the staff at UCC who have embraced and delivered on this collaboration. Professor O’Halloran also thanked Ambassador Sean O’Regan, Ambassador of Ireland in Egypt and the staff at the Embassy, for their continuing support in promoting UCC programmes in Egypt. 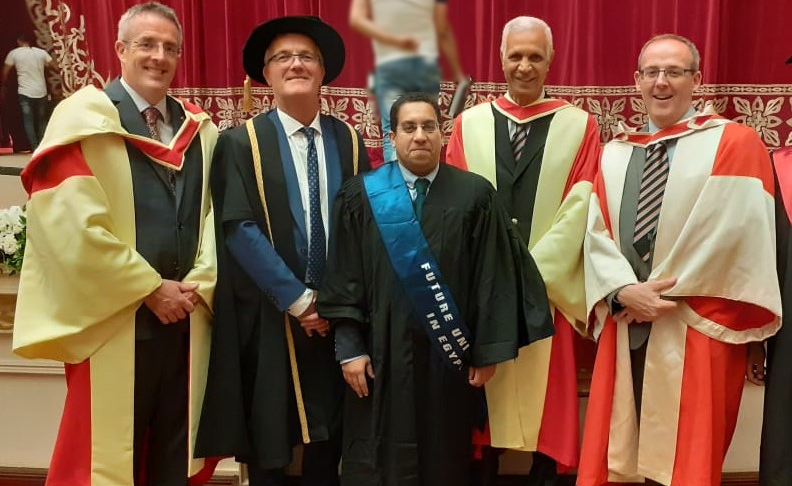 In 2014, UCC signed a cooperation agreement with Future University in Egypt (FUE) to support FUE in the delivery of an enhanced Pharmacy degree programme. The aim of the cooperation agreement is to enhance the teaching and learning of students studying pharmacy at FUE, and to develop a collaborative relationship that enhances the overall international profile of both UCC and FUE. Over the last 5 years, staff at UCC and FUE have been actively collaborating on enhancing the academic standards of the BSc Pharmacy degree at FUE, including numerous UCC staff visits to FUE, exchange of curriculum, and FUE students traveling to UCC to attend summer schools. In 2019, building on the progress of the last five years, FUE and UCC agreed to sign an extension to the cooperation agreement to continue to collaborate for a further 5 years.

Previous Article Next Article
Back to DPR News