A spring exerts a restoring force that is equal in magnitude but opposite in direction to the applied force: F = -k*x where k is the spring constant and has units Nm−1. The term “restoring” force is used because it restores the spring back to its equilibrium (unstrained) position as soon as the applied force is removed.

In an ideal environment (i.e. one without friction or air resistance) the spring would oscillate around the equilibrium position with oscillations of amplitude A. The displacement of a mass on the end of the spring would follow simple harmonic motion. 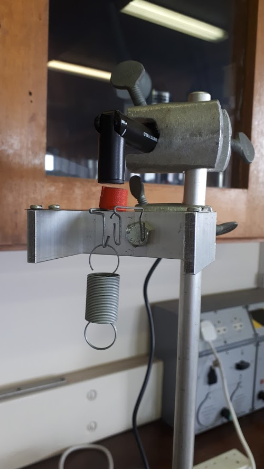 This experiment is split into three parts:

Part 1 is to determine the spring constant by means of Hookes Law as done in the first year labs.

Part 2: Determine the Spring Constant, k, from the frequency of oscillation

Part 2 is to confirm the spring constant be means of oscillationg the spring which is also done in the first year labs, however in this case the magnet and magnetic field sensor are used to measure the sprind oscillations as opposed to the motion sensor used previously.

Part 3: The damping of a system consisting of one mass and spring

Part 4: Two springs and one mass: Springs in series and parallel

In this part oscillations in multiple springs undergoing the same force is explored. The images below show the two configurations of springs and weights that are explored to determine the soring constant of the system. 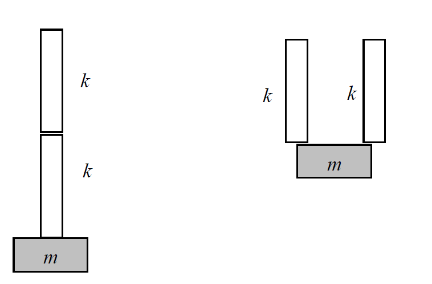 When two equal masses and two identical springs are coupled as shown below, the motion appears to be quite complex. In fact, this motion is a simple mixture of two fundamental modes of angularfrequency ω1 and ω2. A fast fourier transform of the oscialltions can pinpoint the frequency of the oscillations. This is carried out for