There is two parts to this experiment.

See this guided lab for a visual represetation of how this lab is carried out.

In part 1 the amount of damping is very small.  On the other hand, if some of the added mass on the weight hanger is replaced by a metal disc of similar mass and of reasonably large area, air resistance will make a measurable contribution to the dynamics of the system.  The mass attached to the spring will now execute damped harmonic motion. 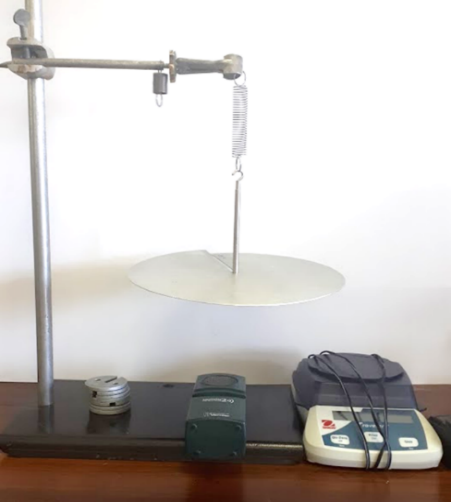 If you want to explore the concepts of harmonic motion try you hand with these online labs / simulations:

This oscillations lab shows the distance time graph achieved for harmonic motion. You can change the spring constant, the mass on the hanger and even acceleration due to graity and se i's effects on the harmonic motion on the distnce vs time graph.

This helical spring online lab shows how to carry out the lab without the uses of a motion sensor.

This Horizontal Oscillations with Damping Lab is different from the lab carried out as it places the sping on the horizontal and uses the force of a moving puck to cause the oscillations to begin. In our experimentthe spring is in the vertical orientation and the use of the force gravity on a massis used to cause the oscillations. However this online lab does give a very good example of how dampening change the position vs time graph of harmonic motion. You can see the effect of the dampening on reducing the energy in the system.