‌Post-Caregiving: Family Carers’ Experiences of Role and Identity Transition on Cessation of the Caring Role – Implications for Policy and Practice

Currently we know little about what happens to carers when the caring role ends and how they might be best supported to transition to life after care. POSTCARE will provide a nuanced knowledge of family carers’ post caregiving experiences of loss, role and identity transition on cessation of the caring role. Using a participatory action research approach, POSTCARE will respond to the issues, challenges and concerns facing former carers via a series of participant led workshop and supports. Primary outputs will include policy, theoretical and media-oriented papers and peer supports disseminated to as wide an audience as possible.

The aim of this project, a collaboration between ISS21, West Cork Carers Support Group (WCCSG), Family Carers Ireland (FCI) and Care Alliance Ireland (CAI), is to develop evidence-based supports and policy to support former carers post-caregiving. It specifically responds to aim 1.3.5 of the National Carers’ Strategy i.e ‘to review existing transition arrangements for carers at the end of their caring role’ (p.13). Through dialogue with former carers, the project will incorporate guidelines, an action plan and the co-development of peer-supports to change and influence policy and practice.

The project objectives are to:

Explore former caregivers’ experiences and lived context of role and identity transition post-caregiving i.e. on cessation of the caring role when the person they care for dies or moves into a home.

The project follows a participatory action research (PAR) approach that prioritises responsive information exchange with those most impacted by the research, namely former carers. It builds on previous collaborations with ISS21 and Family Carers Ireland (2014-2015) and a preparatory ISS21 workshop on carer research/securing H2020 funding (June 2016).

The project outputs will inform national policy and the delivery of carer supports in Ireland and internationally, thus empirically and practically addressing carer needs as prioritised by the National Carer Strategy (2012). It also develops research capacity and routes for continued engagement with partner CVOs on a longer-term basis.

The report, launched in UCC on November 6th 2017, found that post-caregiving involves significant challenges for former family carers, including return to work or education, economic and financial challenges, rebuilding social networks, changed family relationships and dealing with complicated grief and identity rebuilding. This participatory action research (PAR) project set out to highlight the experiences and preferences of former family carers to inform and address this policy and practice deficit. Led by Dr. Carol Kelleher and Dr Jacqui O’ Riordan, ( UCC/ ISS21), and in collaboration with Care Alliance Ireland, Family Carers Ireland (FCI) and West Cork Carers Support Group, the specific purpose was to illuminate and give voice to the experiences and needs of former family carers in the postcaring/ care transitions period – that is, when the caregiving role has ceased.

Specifically, this research presents former family carers’ perspectives to assist carer organisations’ and policy makers’ response to aim 1.3.5 of the National Carers’ Strategy: ‘to review existing transition arrangements for carers at the end of their caring role’. Face-to-face semi-structured and video interviews focusing on 20 former family carers’ experiences were conducted. The final report provides a nuanced account of family carers’ post-caregiving experiences of loss, role and identity transition upon cessation of the caring role.

As part of the project, two short peer support videos were made with former carers who participated in the POSTCARE project, 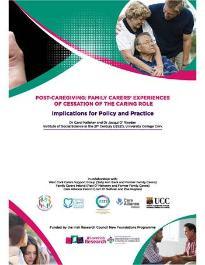