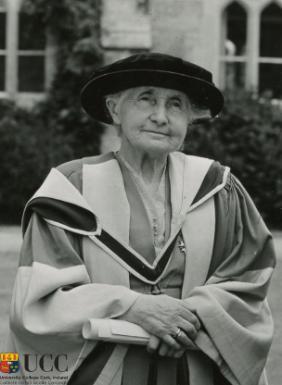 Mary Ryan is the first female professor on the island of Ireland. (Photo (detail): taken on the occasion of the NUI honorary conferring in 1952. UCC University Archives, OCLA, UCC.)

Mary Ryan was born on 14 December 1873 at 4 Thomas Street West (off Henry Street), Cork. Her parents were Edward Ryan (b. Co. Tipperary; d.1932), soap and candle manufacturer, and Matilda O’Connor (married 16/02/1871). Prof. Mary Ryan made a bequest of €1,778 to the University for the purpose of endowing a summer holiday scholarship or a scholarship of short period for the study of French in France, named the Edward and Matilda Ryan Scholarship in memory of her parents. Ryan's siblings were Sir Thomas Ryan (Director-General, Indian State Railways); Sir Andrew Ryan KBE CMG (held high-ranking positions in British consular service, also a Cork graduate and whose son Edward, MA BL, became Professor of Common Law and Dean of Law at UCC); and Archbishop Patrick Ryan OP (in religion Father Finbar), archbishop of Port of Spain, Trinidad.

An obituary was published in the UCC Record with two photographs.[3]

Mary Ryan attended the newly opened St Angela’s College, Patrick’s Hill, Cork (Ursulines) for her secondary education. She was an exhibitioner and gold medallist in the Intermediate examinations. She had an outstanding academic career. In 1891, she matriculated Royal University of Ireland (RUI); in 1892, she finished 1st Arts with honours and as an exhibitioner, likewise in 2nd Arts with honours and an exhibitioner. She spent time during 1892-3 in Germany and France (Ursuline convent, Berlin; and the Dominican convent, Neuilly-sur-Seine, Paris). In 1895, Mary Ryan graduated with BA Hons (RUI), 1st place and an exhibition. Then she held a Junior Fellowship (RUI) and taught at St Mary’s University College, Dublin, and St Angela’s College, Cork. She graduated MA in 1896 (RUI).

During 1898-1901, she was a Junior Fellow in Modern Literature (RUI). During her tenure, she was member of the Board of Examiners of RUI in Modern Languages. Then Ryan was an Intermediate Board examiner in French (1902-8). On 21 October 1909, she was appointed Lecturer in German at UCC.[4]
Then on 25 June 1910 at meeting of the National University of Ireland, Mary Ryan was appointed Professor of Romance Languages at UCC.[5] She signed the Roll Book at the beginning of the new academic year on 24 October 1910. The title of the professorship later changed to ‘French’. Professor Ryan retired in 1938.

In 1935, Mary Ryan was awarded the Ordre national de la Légion d’honneur (full name in English: National Order of the Legion of Honour) by the French government (Third Republic) – the first Irish woman to be so honoured.[6] Photographs of her wearing the star in 1952 are in the University Archives, OCLA, UCC (detail of one shown here).

Mary Ryan is the first Irish woman to be awarded the French Legion d’Honneur (there are five degrees of the Order – it is not clear yet which one Ryan was awarded). No single list of recipients is available.[7] The other Irish women who have received the honour are Mary Lawlor (2014, Frontline Defenders), Máire Geogheghan-Quinn (2014) and Professor Grace Neville (2015, also of UCC).

Some recent works on the Reformation, American Catholic Quarterly (Oct 1911)

How they spread good literature in Germany, Irish Rosary (Feb 1912)

A moralist and his friends, Irish Educational Review (Jan 1913)

Some novels of a century ago, Irish Educational Review (Feb 1913)

Some women of the fourth century, Irish Educational Review (Aug 1913)

Plus articles and reviews in the Dublin Review, Irish Educational Review, Blackfriars, Month, and Irish Rosary

The intellectual life: its spirit, conditions, methods, by A. D. Sertillanges; translated from the new French edition by Mary Ryan (Cork: The Mercier Press, 1946). Most recent repr. 1978.

The Mary Ryan Scholarships are awarded annually to language students by the College of Arts, Celtic Studies and Social Sciences.

The Mary Ryan Seminar Room is located in the O'Rahilly Building, UCC.

In 2010, the College of Arts, Celtic Studies and Social Sciences, UCC, created a film celebrating the centenary of Mary Ryan's appointment as professor. This included a tribute from Mary Robinson, former President of Ireland. Please note that research after 2010 revealed that there were earlier female professors on the island of Britain.

Harford, Judith, ‘The Admission of Women to the National University of Ireland’ Education Research and Perspectives 35:2 (2008), 44-56

Macken, Mary M., ‘Women in the university and the college: a struggle within a struggle’, in Michael Tierney (ed.), Struggle with fortune: a miscellany for the centenary of the Catholic University of Ireland 1854-1954 (Dublin: Browne & Nolan, 1954), 162.