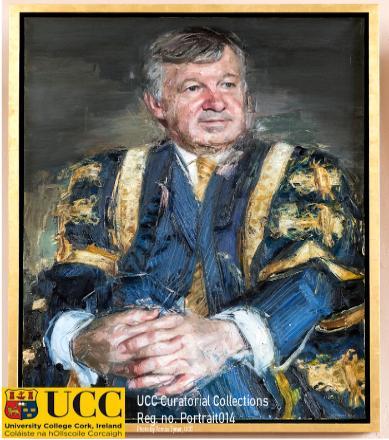 In 1984 Michael Murphy was appointed Assistant Professor of Medicine and Pharmacology at the University of Chicago and was later appointed Chairman of Clinical Pharmacology and Director, National Institutes of Health Clinical Pharmacology Fellowship Training Programme. Returning to UCC in 1992 as Professor of Clinical Pharmacology and Consultant Physician and became Dean of Medicine and Health Sciences in 2000. During this period he managed a programme of expansion and diversification, increasing the number of professional degree programmes from two (Medicine and Dentistry) to six (Nursing, Pharmacy, Speech Therapy and Occupational therapy), which now provides education, training and research opportunities for almost 3,000 students. The associated capital investment programme exceeds €120 million.

As President of University College Cork, Michael Murphy defined a vision for UCC as a critical regional institution “a world-class university connecting the region to the globe” and research excellence in prioritised niche areas combined with research-led and informed teaching were accorded equal value. Governance and management structures were reformed and a pan-university Research Quality Review was initiated. Attention was focused on external societal needs as driver of university priorities and implemented through an extensive internal network of external advisory boards. A programme of internationalisation with an emphasis on Asia was vigorously pursued. Systems were established to ensure that diversified student access was embraced.

The context of the Murphy’s presidency was the unprecedented austerity resulting from the collapse of the global and Irish economy which witnessed a 25% reduction in state funding. Equally, the catastrophic flooding of one-third of University estate (including 29 buildings) in November 2009 required significant crisis management responses. These extraneous challenges, amongst others, were met and overcome with resilience. UCC achieved many successes during this period: the first university in the world to be awarded the Green Flag of the Federation for Environmental Education (Copenhagen, 2010); first university in the world certified for ISO 50001 (energy management standard, 2011); and in 2016 UCC became the first university to be named The Sunday Times University of the Year for two consecutive years, its success being underpinned by making teaching as much of a priority as research.

Over the period of Murphy’s presidency UCC experienced a 15% growth in research funding, generating the second highest amount of research income in Ireland per head of academic staff.  UCC was awarded four major research centres funded by Science Foundation Ireland and there has been substantial growth in licences, patents and spin-off companies as well as the development of a successful business incubation centre. Moreover, the University has the highest number of academic staff (70%) with a qualification in teaching and learning. The University is the first in Ireland to develop an online programme in teaching and learning for staff in higher education. The rates of admissions of students from disadvantaged backgrounds stands at 22% - the highest in Ireland. There is an increasing diversification of the international student population.

Other key events during Murphy’s presidency include the celebrations marking the bicentenary of the birth of mathematician George Boole, Professor of Mathematics at Queen’s College, Cork, and related international publicity including a Google Doodle and the production of a documentary film - The Genius of George Boole (2015) - which has been viewed by over 3.5 million people internationally. The merger between UCC and the Irish Management Institute (IMI) is another major advancement.

Michael Murphy has served in numerous leadership roles in Ireland and internationally including Vice Chancellor of the National University of Ireland, Member of Council of the European Universities Association, Chairmanship of the Health Research Board (1997-2002); and board member Health Services Executive (2003-2009).

The portrait of Michael B. Murphy is on display in the Aula Maxima, UCC.