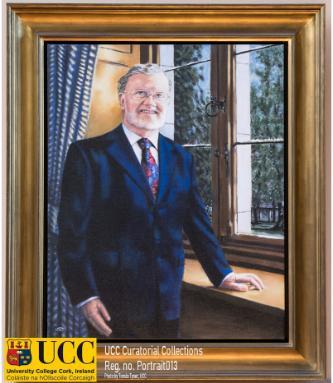 Born in Limerick in 1940 and educated at Christian Brothers College in Cork, Gerry Wrixon studied for his primary degree in electrical engineering at University College Cork and was awarded a BE (1961). He worked for a time with Fokker Aircraft in Holland and then studied at California Institute of Technology (Caltech) where he was received his MSc in 1964. He continued his studies at the University of California at Berkley and was awarded a PhD in 1969. Wrixon worked in the research area of Bell Telephone Labs, New Jersey, USA from 1969-1974. In 1974 he was appointed lecturer in Electrical Engineering at University College Cork and was appointed Professor of Microelectronics in 1982.

In 1981 the Irish government established the National Microelectronics Research Centre (NMRC) and appointed Professor Wrixon as the founding Director. By establishing the NMRC the government was seeking to enhance the attractiveness of Ireland as a destination for inward investment in Information and Communications Technology (ICT). The focus of the NMRC was to perform state-of-the-art research and to produce masters and PhD graduates to support the growth of the industry in Ireland. Under Wrixon’s leadership the NMRC rapidly developed into Ireland’s largest research centre. The Centre played an important role in the expansion of the ICT sector in Ireland, and the scale of NMRC research income resulted in UCC becoming the highest earner of competitive research funding in the Irish university sector. Now styled the Tyndall National Institute the NMRC has continued to evolve and expand and is now one of Europe’s leading ICT research institutes.

In 1987 the government appointed Professor Wrixon the first Chairman of a new state agency, Eolas – the Irish Science and Technology Agency. Formed by the merger of the Institute for Industrial Research and Standards (IIRS) and the National Board of Science and Technology (NBST), the primary objective of Eolas was the expansion of industry in particular, and of economic and social development in general through science and technology.  As Chairman of Eolas, Gerry Wrixon played a central role in shaping the direction of national science policy in Ireland.

Reflecting his long-standing commitment to the promotion of the humanities and the arts at local level, Gerry Wrixon, made an important contribution to the arts in Cork as Chairman of the Triskel Arts Centre and as a long-standing member of the board of the Cork Opera House.

Professor Wrixon was appointed President of UCC in January 1999.

Across a broad range of metrics, UCC expanded dramatically during Wrixon’s tenure. Student numbers increased from 11,500 to over 18,000. Much of the student growth was at postgraduate level and this resulted in a significant increase in research output. The capital programme, expanded UCC’s buildings by 50% and land holdings by 30%.

Reflecting his own broad experience outside of academia, Wrixon introduced a commercially aware approach to the management of UCC. This is best illustrated by his decision, early in his Presidency, to offer the UCC banking and catering franchises by way of public tender. As a direct result of this innovative approach UCC received additional resources of considerable financial value. This income was used for a number of priority projects. The funding was particularly important in expanding the level of IT based teaching and also provided a much needed improvement in access to IT facilities for the general student body.

During Gerry Wrixon’s presidency the scale of philanthropic funding provided by Cork University Foundation reached unprecedented levels. A major capital programme transformed the campus and allowed a major expansion of the Boole Library (the first expansion since it was built in the 1980s), the construction of the award-winning Glucksman Gallery, a new School of Pharmacy, a Medical Sciences complex at Brookfield, the Environmental Research Institute and the Western Gateway Building. There was also a major expansion of dedicated research space including ICT (Tyndall), Biosciences (APC) and the Glucksman Marine Research Centre. Expansion of research activity in the humanities also occurred with the development of the Irish National Institute for Historical Research being particularly noteworthy.

UCC managed student accommodation increased from less than 200 to almost 1,000 beds. In addition, new accommodation was developed for visiting staff. The campus environment was also enhanced by developments such as the Honan Square, the refurbishment of the Stone Corridor and the Grubb Telescope as well as a complete renovation of  the Aula Maxima.

In parallel with the major investment in capital assets and advanced research, President Wrixon ensured that there was also a focus on improving the quality of teaching. Philanthropic support facilitated the establishment of the National Academy for the Integration of Research into Teaching and Learning (NAIRTL) at UCC. The objective of this innovative development was to enhance the student experience by improving teaching quality. A series of training programmes for academics leading to the award of a Masters qualification in Teaching and Learning provided staff with expert support to upgrade their teaching skills.

A range of Professorial appointments strengthened academic leadership in a variety of disciplines. New degree programmes were also established in the areas of Pharmacy, Chinese Studies, Sports Studies, Art History, Religious Studies, Early Childhood Studies, Nursing, Occupational Therapy, Speech and Language Therapy and Architecture. The architecture programme was developed in partnership with Cork Institute of Technology with a joint degree being awarded to students. The strengthening of relations between the two third-level institutions in Cork was a particular focus of Wrixon’s tenure.

Strong links with civil society and business leaders were nurtured by President Wrixon thus ensuring that UCC benefitted from external feedback and advice thereby enhancing the university’s contribution to economic, social and cultural development. The extensive programme of events and the central role of UCC during 2005 when Cork was designated European Capital of Culture was a direct consequence of this enhanced external engagement.

Wrixon also led the reform of internal governance of UCC. He oversaw major change to the traditional college structures. The objective was to strengthen the role of academics in the leadership of the University and to devolve decision-making to the greatest extent possible. Four Colleges, each with an executive College Head and a decentralised budget were established. Faculty and departments were made more accountable, not only for the headcount of undergraduate students, but also for a range of achievements, especially in the area of research.

The presidency of Gerry Wrixon is characterised by reform and expansion. The scale of investment, much of which was financed through commercial and philanthropic funds, positioned UCC at the forefront of the university sector and consolidated its position as the leading research university in Ireland.

Gerry Wrixon lives locally and continues his involvement in business, the arts and public life. Although formally retired he continues to participate in research and is based in the Tyndall National Institute, and is also past Chairman of the School of Cosmic Physics at the Dublin Institute for Advanced Studies.

The portrait of Gerard T. Wrixon is on display in the Aula Maxima, UCC.