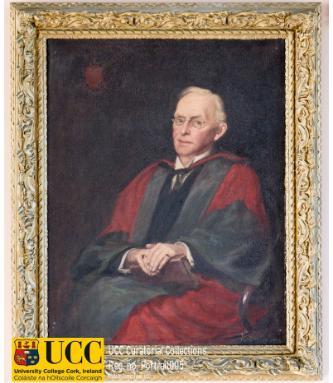 Bertram Coghill Alan Windle was born on 8 May 1858 at Mayfield vicarage, in Staffordshire, England, to the Rev. Samuel Allen Windle (vicar of Market Rasen, Lincolnshire) and his wife Sydney Katherine Coghill. She was a daughter of Admiral Sir Josiah Coghill of West Cork. Thus Windle was first cousin (on his mother’s side) of writer Edith Somerville with whom he was a close friend. When Windle was a child, the family re-located to Kingstown (Dún Laoghaire) where he spent his early years. He was educated at Kingstown and Repton, England, and at Trinity College Dublin where he distinguished himself in English literature and natural science (BA 1879), he then went on to graduate in medicine (MD BCh) and Doctor of Science (DSc). He later received the honorary degrees: LLD from Royal University of Ireland, Birmingham and Boston, PhD from Rome, and DSc from Marquette University.

Windle pursued his medical career in Birmingham. During his time in Birmingham he became a convert to Catholicism, became involved in social and charitable work and took up Liberal politics, supporting home rule and land reform. He was the first full-time professor of anatomy at Queen’s College, Birmingham, and was also dean of the medical faculty from 1891. He was foremost in the development of the Birmingham Medical School, which, after its transfer to Mason Science College (granted university status under the Mason University College Act 1897 and incorporated in 1898), then received a royal charter in 1900 becoming the new University of Birmingham. Windle was the first Dean of the new university’s medical faculty. In parallel with this he established a reputation as a brilliant anatomist. A member of the General Medical Council, he was twice Vice-President of the Anatomical Society of Great Britain and Ireland. The Royal Society of London elected Windle a fellow in 1899. He was appointed member of the consultative committee under section 4 of The Board of Education Act, 1899.[1] In 1909, he was made a knight of St Gregory the Great by Pope Pius X and in 1912, he was knighted by King George V during a ceremony at Buckingham Palace on 6 March 1912.[2]

Coming to Cork in 1904 after his success as an administrator at Birmingham, Windle was a reforming leader who, as one of the Dublin Commissioners drafted and oversaw the Irish Universities Act of 1908, which saw the transformation of Queen’s College, Cork, into University College, Cork, within the federal framework of the National University of Ireland. The College premises were substantially extended during his tenure, particularly the acquisition of the Athletic Ground at the Mardyke in 1911 and of land to the east of the main campus, on which the Geography building now stands. A new Physics and Chemistry Building – now Civil Engineering – was built in 1910, which freed up badly needed space in the West Wing. The engineering and medical schools were re-organized and new departments of Archaeology, Economics, Education, Hygiene and Public Health, Mathematical Physics, Medical Jurisprudence, Music, Ophthalmology, and Pathology were created, with several other subjects separated into their own departments.[3] The institution of a Student’s Club, which provided on-site catering for the first time in 1907, demonstrated a genuine concern for student welfare.[4] He also promoted the university by creating its first magazine – the UCC Official Gazette, which was published 1911-1920. This documented the campus for the first time, with maps and photographs. During this period the first promotional booklet was printed.[5] A concern for the well-being of male Catholic students led to the provision of accommodation at St Anthony’s Hall (previously known as Berkeley Hall), and a few years later was taken over and refurbished as the Honan Hostel.

In 1907 on the resignation of Professor Charles, Dr Windle separated Anatomy and Physiology, and took the Chair of Anatomy himself, from which he resigned in 1909 when he founded the Department of Archaeology in 1910 becoming the first Professor of Archaeology for the following five years. During his tenure, Mary Ryan MA was appointed the first female professor – becoming the first on the island of Ireland. Other women were also appointed, with Elizabeth M. O’Sullivan (Education) and Walburga Swertz (German) as lecturers. Windle was open to the world of business and founded the Faculty of Commerce in 1908,[6] and was also keen to promote journalism. In conjunction with Professor Timothy A. Smiddy (Economics), unpaid three-month internships in the offices of business firms, railways or chartered accountants in the summer months were offered to the second- and third-year Commerce students.[7]

Windle was born into a Church of England family, but later converted to Catholicism. The colleges of the National University of Ireland are non-denominational, however Windle wished to have student accommodation for Catholics and also a chapel nearby for staff and students. In association with Sir John R. O’Connell, solicitor to the Honan Trust, the Honan Hostel and St Finbarr’s Collegiate Chapel (usually known as the Honan Chapel) were established with a separate legal identity to the University. The Honan Trust was awarded a charter in 1915. The Honan Chapel (consecrated in 1916), which is extra mural to the University, is a key achievement of Windle’s presidency. It is the finest example of the Irish Arts and Crafts movement which brought together crafts men and women to create a collection of associated liturgical artworks in metal, stone, textiles, glass and wood.[8]

As President, Windle identified strongly with the local community and wider region, fostering adult education and taking a keen interest in national prosperity serving as President of the Irish Industrial Conference (1905).[9] As a member of the Irish Convention, 1917-1918, he strove to promote a practical compromise between the various groupings in Ireland. Ireland’s rapidly changing political environment was reflected within the University and Windle increasingly found himself at odds with the emerging new order. In April 1919, he was invited to join the staff of St Michael’s College in the University of Toronto to become a professor of philosophy, arriving there on Christmas Eve of that year. He contributed a course of lectures at the University of Ontario, later being made professor of cosmologv and anthropology in St. Michael’s College, Toronto, and special lecturer on ethnology, University of Toronto. During his stay in Canada he became a prominent figure in the intellectual life of the Dominion.  Despite his own perspective of seeing his years in Cork as ‘wasted’, Prof. John A. Murphy states that ‘Nothwithstanding this jaundiced retrospective self-assessment, Bertram Windle must be regarded as an outstanding, energetic, creative, and visionary president of QCC/UCC.’

Windle married twice, first in 1886 to Madoline Mary Hudson (1862-1900), with whom he had two daughters and a son who died an infant; and in 1901 to Edith Mary Nazer (c.1870-1960). His daughter Mary married John J. Horgan, Cork solicitor and city coroner; their daughter Madoline O’Connell was a medical graduate of UCC. Sir Bertram Windle died on 14 February 1929 aged 71 in Toronto, Canada, and is buried at Mount Hope Catholic cemetery, Toronto. Obituaries appeared in Nature,[10] British Medical Journal[11] and the Catholic World.[12]

A portrait of Sir Bertram Windle hangs in the Aula Maxima, UCC.[13]

Windle published prolifically. This bibliography present only a selection and thus is  incomplete. Some works went into more than one edition, details of which are not included here.

A handbook of surface anatomy and landmarks (London: H.K. Lewis, 1888)

The Birmingham School of Medicine (Birmingham: printed by Hall and English, 1890)

The proportions of the human body (London: Baillière, Tindall and Cox, 1892)

Life in early Britain: being an account of the early inhabitants of this island and the memorials which they left behind them (London: D. Nutt, 1897)

Chester: a historical and topographical account of the city (London: Methuen, 1903)

Remains of the prehistoric age in England: archaeological remains from the Stone Age to the Iron Age (London: Methuen, 1904)

Facts and theories: being a consideration of some biological conceptions of to-day (London: Catholic Truth Society, 1912)

A century of scientific thought and other essays (London: Burns & Oates, 1915)

Science and morals and other essays (London: Burns & Oates, 1919)

Who’s who of the Oxford Movement: prefaced by a brief story of that movement (New York; London: The Century Co., 1926)

The Catholic Church and its reactions with science (London: Burns Oates & Washbourne, 1927)

Religions past and present: an elementary account of comparative religion (London: Williams & Norgate,  1927)

‘Reports and analyses and descriptions of new inventions in medicine, surgery, dietetics, and the allied sciences’, British Medical Journal Vol. 1, no. 1201 (1884), 18.

Introduction to the 1906 edition of The Natural History and Antiquities of Selborne, by Gilbert White (1720–93)

‘The National University and development of the intellectuality of the nation’, Journal of the Ivernian Society (1911)

‘The National University and the people’, Journal of the Ivernian Society (1912)

‘Recent developments in university education in Great Britain’, in Empire Club of Canada: addresses delivered to the members during the year 1920 (Toronto: Warwick Bros and Rutter, 1921), 53-63

Sir Bertram C. A. Windle, ‘Recent developments in university education in Great Britain’, in Empire Club of Canada: addresses delivered to the members during the year 1920 (Toronto: Warwick Bros and Rutter, 1921), 53–63

‘Is Not Foe to Cause of Science. Sir Bertram Windle explains the position of the Catholic church’, The Toronto World, 16 March 1920, 4

Dermot Keogh, ‘Both an architect and modernising force in third-level education in Cork’, The Irish Times, 15 February 2011

[7] Windle, ‘Recent developments in university education in Great Britain’, in Empire Club of Canada: addresses delivered to the members during the year 1920 (Toronto: Warwick Bros and Rutter, 1921), 59.

[8] Sir John R. O’Connell, The Honan Hostel Chapel: some notes on the building and the ideals which inspired it (Cork: Guy, 1916).