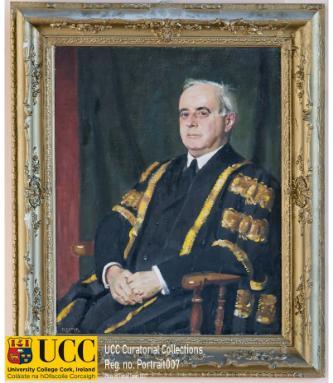 Alfred O’Rahilly, was born in September 1884[1] in Listowel, Co. Kerry, the son of Thomas F. Rahilly, clerk of petty sessions, and his wife Julia M. Curry. He changed his surname by deed poll in 1920 to ‘O’Rahilly’.[2]   He was educated at St Michael’s College, Listowel, and at Blackrock College, Dublin.[3] O’Rahilly was awarded a BA (1907), MA in Mathematical and Experimental Physics (1908) by the Royal University of Ireland. He then entered Stonyhurst College, Lancashire, England, where he is an resident at the time of the 1911 census. At Stonyhurst, he studied at St Mary’s Hall, where he attended a three-year course in scholastic philosophy in the Jesuit novitiate for which he was awarded the papal degree of DPhil.[4] O’Rahilly then gained a BSc (1912) at University College, Dublin. In 1914 he was appointed assistant lecturer in the Department of Mathematics and Mathematical Physics at UCC, and made full Professor of Mathematical Physics in June 1917. He became Registrar of the college in February 1920, and held the post until 1943 when he became President. He spent a year, in 1927, at Harvard University studying social and political theory. On his return, he persuaded the Governing Body to establish a lectureship in sociology, which he took on without salary.[5] The National University of Ireland conferred on him the honorary degree DLitt in 1939 and, in the following year, his work on Electromagnetics obtained for him the degree DSc.

After the 1916 Easter Rising, O’Rahilly publicly supported Sinn Féin and was elected to  Cork City Council as a Sinn Féin and Transport Workers candidate. Arrested early in 1921 for his political writings, O’Rahilly was interned in Spike Island prison in Cork harbour. Released in October 1921 he was constitutional adviser to the Irish Treaty Delegation. O’Rahilly supported the Anglo-Irish Treaty and in 1922 he composed a draft constitution for the Irish Free State.  O’Rahilly led Irish delegations to the International Labour Organization conferences in 1924, 1925 and 1932, and took on conciliatory role in trade union and employers disputes in Munster. Standing as a candidate in Cork Borough for Cumann na nGaedheal, he was elected to the 4th Dail at the 1923 general election but did not go for re-election in 1924.[6] As representative of the Irish Government, he attended the Sixteenth Session of the International Labour Conference at Geneva in 1932.[7] He was a member of the Banking Commission and, from 1923, Chairman of the Cork Arbitration Board, where he was prominent in the settlement of industrial disputes. In this latter role he was active in securing compensation for the loss of employment suffered by the workers of the Cork Electric Tramways and Lighting Company, for which work some of the tramway men of the city presented him with 'The Tramway Cup' in 1933.

O’Rahilly had a dominant personality and was a prolific scholar, polymath, controversialist and public figure. His UCC initiatives included improvements in his role as Director of the Library, the institution of student health and restaurant services, and the acquisition of the extensive former County Gaol site which made significant building expansion possible. Other innovations included the foundation of the Department of Electrical Engineering, Cork University Press in 1925 (which he handed over to the College in 1928)[8] and UCC’s second in-house magazine, Cork University Record, in 1944. O’Rahilly strengthened College links with the city and the province, particularly in adult education courses. He instituted a diploma in Social Science, the first diplomate was Seán Casey who was later a TD for Cork city and Lord Mayor.[9] He published prolifically, often on issues relating to religion and politics.

Alfred O’Rahilly married Agnes O’Donoghue on 4 September 1916 at Rathmines, Dublin. They had two children. She died on 14 September 1953.[10] He retired from the presidency of UCC in October 1954 and moved to Blackrock College (Holy Ghost Fathers), Dublin, where he was ordained as a member of the order on 18 December 1955, aged 71.  He remained at Blackrock, becoming a monsignor in 1960. O’Rahilly died at St Michael’s nursing home, Dún Laoghaire, on 2 August 1969. He is buried in the community cemetery in the grounds of Kimmage Manor, headquarters of the Holy Ghost Fathers.[11] O’Rahilly left his theological library to the Jesuits at Milltown Park; in 2019 the Milltown Park library was transferred to Dublin City University;[12] his other books were given to Blackrock College.

In 1998 the new Business and Languages building, named the Alfred O’Rahilly Building, was opened by Micheál Martin, Minister for Education (a UCC graduate).[13] O’Rahilly’s tenure as Director of the Library is remembered in the relief created by Séamus Murphy RHA that is on display in the Boole Library.

The portrait of Alfred O'Rahilly is on display in the Aula Maxima, UCC.

Prof. John A. Murphy, Emeritus Professor of History, contributes his memories while an undergraduate during the presidency of Dr O'Rahilly to the UCCIreland YouTube channel.

O’Rahilly published prolifically including newspaper articles and brief papers, so this is merely a selection of his output.

A guide to books for social students and workers (Dublin: Educational Company, 1916)

Flour wheat and tariffs: a reply to the Tariff Commission. A study of the urgent problems of tariffs and tillage (Dublin : Eason and Son, Ltd., 1928)

Statement written by Professor Alfred O’Rahilly, Registrar, University College Cork, on 6th November 1933 on behalf of himself and five of his colleagues (Cork: Lee Press, 1933)

Thoughts on the constitution ([Dublin]: Browne and Nolan Limited, [1937])

The constitutional position of education in the Republic of Ireland (Cork: Cork University Press, 1952)

Gospel meditations, with a foreword by M. C. D’Arcy (Dublin: Browne and Nolan, 1958)

‘Limiting the number of medicals’, Cork University Record, No. 7 (Summer 1946)

‘The proposed full-time state official for obstetrics and gynaecology. Statement made by President Alfred O’Rahilly to the South Cork Board of Assistance, 18th January, 1952’, Cork University Record, No. 24 (Easter, 1952)