She was educated privately as her mother did not believe in further education for women.[1] Despite Mrs Cummins’ objection, both Iris and her sister Mary attended university. In 1915 July, Iris graduated as Bachelor of Engineering (NUI) at UCC. Alice Perry qualified BE in 1906 at Queen’s College Galway becoming Ireland’s first female engineering graduate. After World War One, Iris was awarded BSc Honoris Causa (War degree);[2] conferred 27 April  1918.[3]

During World War I worked at Royal Naval Dockyard Rosyth on the Firth of Forth, Scotland.[6] Also during the war worked in munitions production at the Royal Arsenal, Woolwich, London; and during 1916-17 at Vickers in Erith, Kent.[7] In 1917, she worked in the Admiralty Department, Haulbowline Dockyard, followed by a period running the family farm from 1918-1924.[8] She then began her own private practice in Cork in land surveying in 1924.[9] Cummins was a member of the Women’s Engineering Society (using post nominal letters MWES) and presented a lecture to 5th Annual Conference of the Women’s Engineering Society (founded 1919), on 17 September 1927, on “The Shannon Scheme”; paper published in The Woman Engineer (see publications). In 1927, Cummins was appointed first female land surveyor (outdoor staff) for the Irish Land Commission.[10] This was not a permanent position, for which she received only a small pension.[11] In 1929, she apparently attempted to set up own business, accompanying publicity photo for a firm of electrical engineers formed by British women to electrify rural districts.[12] It is unclear as to whether this venture took off. She retired in 1954.

Iris Cummins was a keen hockey player. She gained first cap in hockey in 1911 when she was 15 and played in all international matches from then until 1929 (except in 1911 and 1921), playing left half, right half and centre half and, at the end of her international career with Monkstown club, as goalkeeper.

She began as a senior player in 1910 with Cork Ladies. In her first season Cummins played on the Munster Interprovincial side. During her time as undergraduate, she played on the UCC Ladies Hockey team. In 1914 she was captain of the team that won the Munster Cup [photo, UCC Official Gazette, Vol. 4 No 12 (June 1914)]. 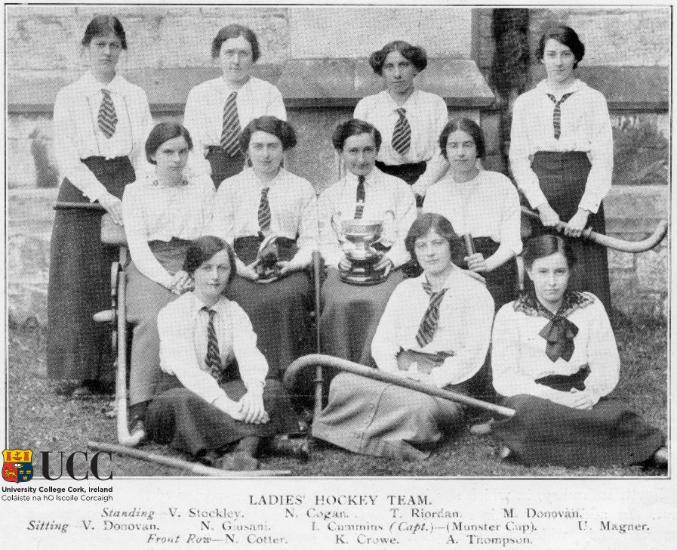 Photo: UCC Official Gazette, Vol. 4 No 12 (June 1914). Iris Cummins, who was the Captain of this team, is holding the Munster Cup.

Cummins retired from international hockey in 1939.[14] Three of her sisters also played hockey for Ireland. She was President of the Irish Ladies Hockey Union for the years 1922-23 and 1924-25. Captain of the Irish team on several occasions.

As an Irish Hockey International, she captained the team that travelled to USA in 1925. Read the article about the visit of the team in Vassar Miscellany News 10:6 (14 October 1925):[15]

Sailed on the Baltic arriving in New York about October 18. Their schedule is as follows: October 24 —The U. S. Overseas Team of 1928 in Philadelphia. October 28 —Vassar College. October 31 —New York. November 4 —Fairchester at Greenwich. November 7 —Bryn Mawr College. November 11 —Philadelphia at the Merion Cricket Club. November 14 —Chicago. November 18—Madison. November 28—Wellesley College. November 26 —Boston at Wellesley, November 19—U. S. Team of 1928 at Wellesley. December 1 —Baltimore-Washington at Baltimore. December 8 —Richmond, Va. November 20 will be spent at Niagara Falls which is the one place the visitors requested to be allowed a chance to see. They return to England December 5.

With the team Cummins went to the White House at the invitation of President Calvin Coolidge.