What is Wildlife Crime and What Can We Do About It In Ireland?

Wildlife crime is a widespread issue that poses a serious threat to our biodiversity and the sustainable development of countless communities. While there is no universally accepted definition of what constitutes wildlife crime, it can be described as any the harming, taking, trading, possessing, obtaining, or consumption of wild flora and fauna[1]. Wildlife crime puts the lives and survival of invaluable species at risk and jeopardises conservation efforts that are in place to preserve our precious biodiversity. 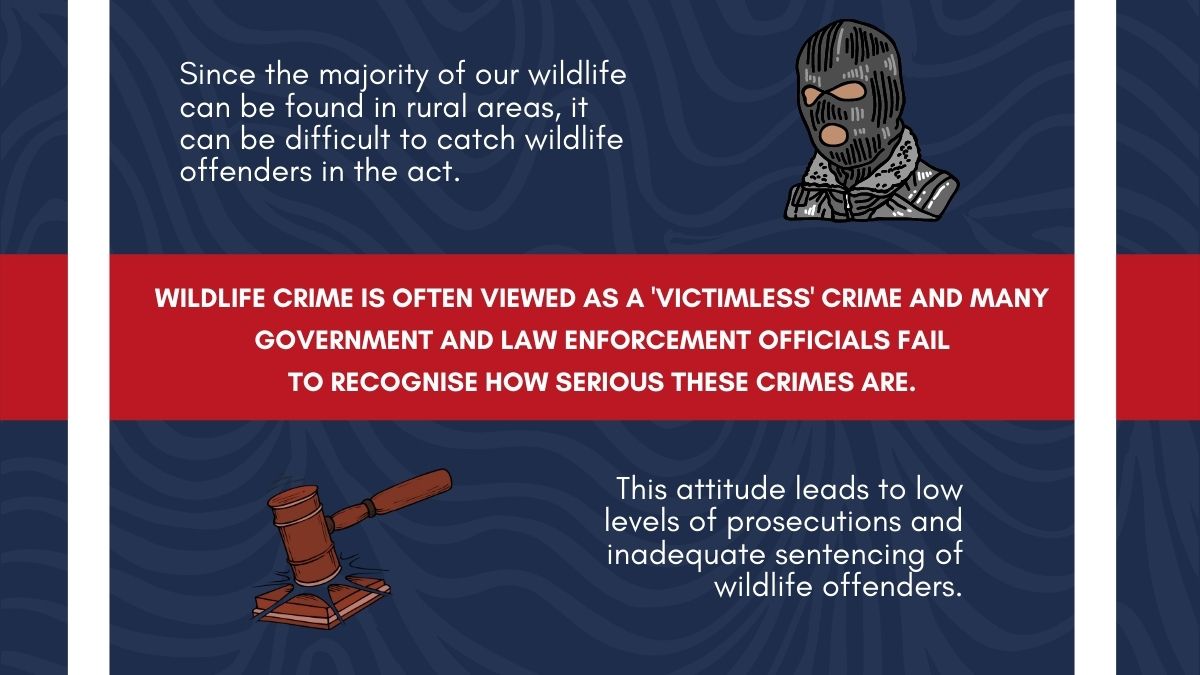 In Ireland, wildlife crime is an offence that goes against existing legislation that protects wild plants, animals, and habitats. A large amount of wildlife crime activity in Ireland goes unreported and incidences of wildlife crime are on the rise[2]. The rural habitats that our wildlife often live in makes it difficult to catch wildlife offenders in the act. Birds of prey are particularly vulnerable to wildlife crime[3] and are often the victims of intentional poisoning[4]. Predators such as seals, foxes, badgers, otters, and pine martens are frequently (and unlawfully) persecuted for sport, by organised crime groups or by those who believe wildlife to be an ‘inconvenience’.

The Wildlife Act 1976[5] is our key national legislation that protects wild flora and fauna and controls activities that may cause harm to wildlife in Ireland. Under EU[6] and international law[7] Ireland is legally obligated to protect our biodiversity. However, despite the existence of this extensive legal framework and increasing public awareness related to this criminal activity, wildlife crime continues to be a significant (and increasing) problem in Ireland.

The National Parks and Wildlife Service (NPWS) plays a major role in wildlife conservation in Ireland. It is part of the Heritage Division of the Department of Housing, Local Government & Heritage and works to protect and enhance our biodiversity. However, the NPWS has been under-funded and under-resourced for far too long and this has greatly impacted their ability to tackle conservation issues and wildlife crime[8]. The government commissioned a report to review the structure, funding, and status of the NPWS in 2021[9], the findings of which are yet to be published.

Many people hold a misguided perception of wildlife species. They consider wildlife to be a nuisance that have negative impacts on people’s livelihoods[10]. This results in people coming into conflict with wildlife species and the way they are managed, and generally, these conflicts are difficult to solve and increase in severity as wildlife populations grow[11].

Crimes against wildlife are often categorised as ‘victimless crimes’[12]. This interpretation fails to recognise the inherent value of biodiversity species ‘under a non-anthropogenic ethic’[13]. The persistent under-resourcing of wildlife crime organisations indicates that it is a low priority in comparison to traditional criminal activity (gun crime or drug crime)[14].

Many government and law enforcement officials fail to take wildlife crime seriously, which can lead to low numbers of prosecutions[15] and inadequate sentencing of wildlife offenders[16]. The continual dismissal of the severity of wildlife crime could be fueled by the consistent low prosecution rates of wildlife crime[17]. This is a vicious cycle that must be broken if these issues are to be addressed. 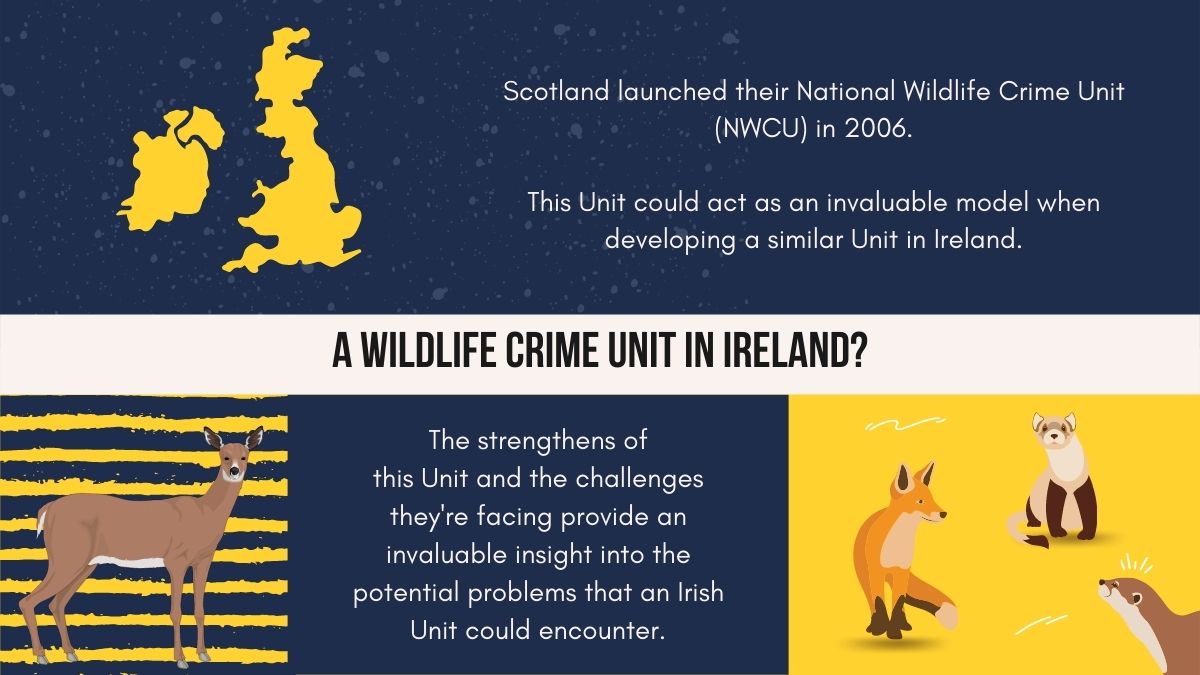 What Does Ireland Need?

Ireland is in dire need of a specialised Wildlife Crime Unit. This Unit would be dedicated to tackling crimes against wildlife species which will allow these offences to be more easily investigated, detected, and prosecuted. In 2020, the Department of Housing, Local Government and Heritage confirmed that a Wildlife Crime Unit would be established in 2021. Despite this promise, no such Unit has been created and no timescale for the formation of a Wildlife Crime Unit has been published[18]. The lack of urgency in our approach to wildlife conservation issues  will result in precious species and habitats being destroyed and lost forever.

Scotland launched their National Wildlife Crime Unit (NWCU) in 2006. This Unit could act as an invaluable model when developing a similar Unit in Ireland. The NWCU faces similar challenges to those we are experiencing in Ireland in terms of biodiversity conservation and wildlife crime activity. Under-resourcing, ineffective penalties, and disproportionate criminal sentencing for wildlife crime offences are issues of growing concern in Scotland in recent years. While these challenges impede the NWCUs ability to prevent wildlife crime and adversely impact the deterrent nature of wildlife legislation, they do provide an invaluable insight into the potential problems that an Irish Unit could encounter.

Some progress has been made in Ireland over the past year. In June 2021, a joint protocol[19] between the NPWS and An Garda Síochána was launched to tackle wildlife crime. This protocol established close working relationships between these organisations, built on existing informal ties, to enhance inter-agency collaborations. Gardaí are also training park rangers in investigation techniques which will help tackle and reduce incidences of wildlife crime[20].

However, much more time, attention, and resources must be dedicated to conservation efforts in Ireland if we are to have any hope at preserving our biodiversity and natural heritage areas. Strengthening enforcement mechanisms and wildlife legislation is essential to protect wildlife species and deter wildlife crime. Proportionate punishments will increase the significance of these crimes in the eyes of government officials, law enforcement, and the public which will ultimately help prevent and reduce wildlife crime. 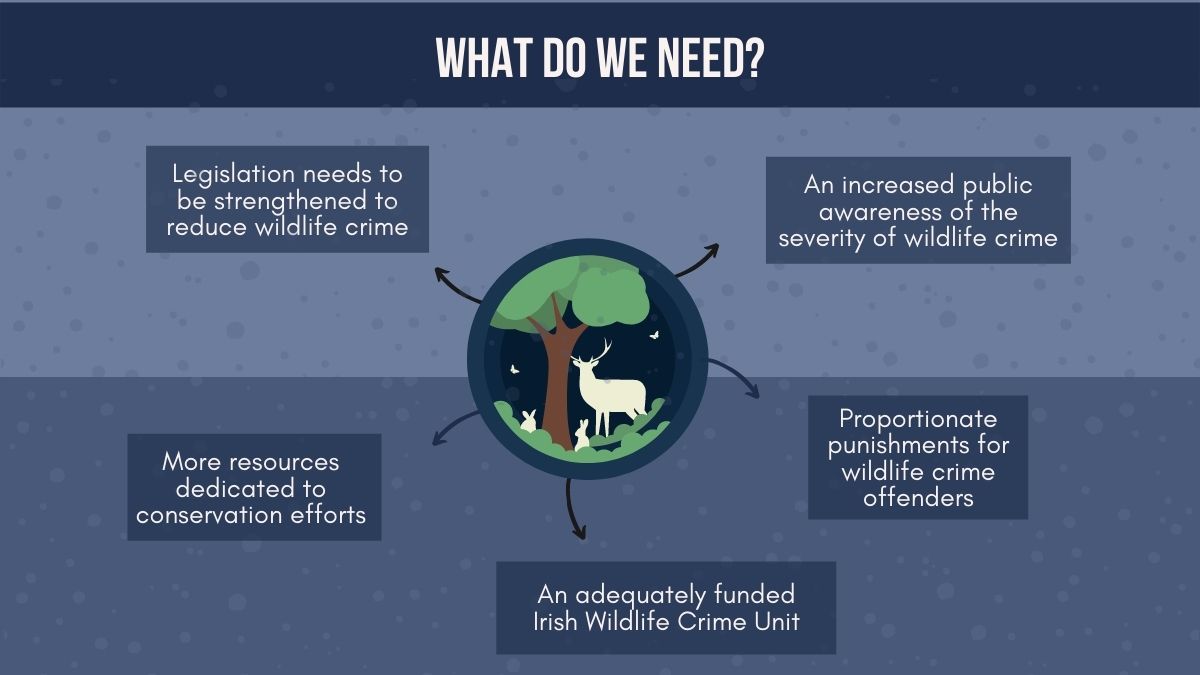 Change is urgently needed and this is recognised on a local and national level. In October 2021, Malcolm Noonan TD released a statement announcing that he was leading a comprehensive review process called ‘Review, Reflect, Renew: A Strategic Action Plan for the Future of the NPWS’[21]. The resource challenge faced by NPWS is said to be at the centre of this strategic action. The NPWS has also secured an increase in financial support that would bring NPWS funding back to a level that has not been seen in since the financial crisis[22]. This is a welcome decision that will go a long way towards conserving what's left of our biodiversity and protecting endangered species.

Legislative change[23] will likely be needed to establish a successful Wildlife Crime Unit and strengthening wildlife protection laws in Ireland will not only reduce wildlife crime, but also create renewed political will to address these issues and increase public awareness of wildlife crimes. Every Wildlife Crime Unit has obstacles it must overcome, and an Irish Unit will be no different. However, if armed with the necessary resources, and legislative framework, the creation of an IWCU could be a game-changer for detecting and reducing wildlife crime in Ireland.

[To report any suspected wildlife crime activity, contact the NPWS. Contact An Garda Síochána if a crime is taking place at the moment or if anyone is in immediate danger. Check out https://wildlifecrime.ie/reporting-a-wildlife-crime/ for an extensive list of resources related to reporting wildlife crimes in Ireland].

[3] NPWS, R.A.P.T.O.R: Recording and Addressing Persecution and Threats to Our Raptors (2019) https://www.npws.ie/sites/default/files/publications/pdf/2019-raptor-report.pdf

[10] These can be direct or indirect impacts on areas including agriculture, livestock, forestry, and fisheries. J. M. Milner, and S. M. Redpath, Building an Evidence Base for Managing Species Conflicts in Scotland (Scottish Natural Heritage, Commissioned Report No. 611 - 2013) 1.

[21] Department of Housing, Local Government and Heritage, ‘Statement from Minister of State for Heritage and Electoral Reform, Malcolm Noonan TD, on Budget 2022 and the future of the National Parks and Wildlife Service’ 14 October 2021 (press release) https://www.gov.ie/en/press-release/65179-statement-from-minister-of-state-for-heritage-and-electoral-reform-malcolm-noonan-td-on-budget-2022-and-the-future-of-the-national-parks-and-wildlife-service/

[23] Scottish Ministers are legally obligated under Section 26B of the Wildlife and Natural Environment (Scotland) Act 2011 to publish an annual report on offences committed related to wildlife. A similar obligation imposed on Irish Ministers could be beneficial to Ireland and its wildlife protection efforts.