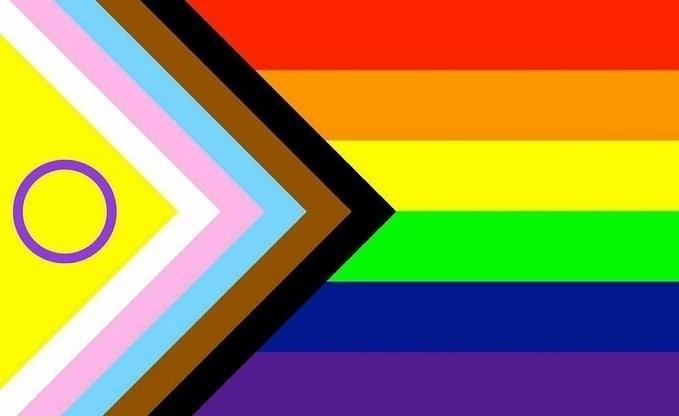 We're now familiar with the rainbow flag but do we understand what it really means? Through our #ProgressWithPride campaign which starts on 11 October 2021, we are encouraging the UCC community and visitors to our beautiful campus to support LGBTI+, black, brown and ethnic minority communities, raise awareness of the meaning of the colours and how they represent different facets of the community and also highlight intersectionality. We want to ensure everyone feels they belong, are part of our community and that allyship is informed.

We would like to invite UCC staff, students and visitors to our campus to visit kindly consider posting pictures of the walkway or pictures of themselves on social visiting the UCC rainbow walkway with the hashtag #ProgressWithPride to show their support for our diverse community.

#ProgressWithPride symbolises the progress we have made since the first LGBT+ networks were established here in UCC in the 1980s, our own progress as a country, the personal progress of each individual, and the progress we still need to make towards becoming a truly inclusive community.

Rainbow walkway unveiling
As part of this campaign we are delighted that our President John O' Halloran unveiled a UCC rainbow walkway on campus on 11 October (between the Boole Library and O' Rahilly Building).  The walkway is based on the Progress Flag design by Valentino Vecchietti.  For the meaning of the colours, see the section below.

The rainbow walkway was proposed by the LGBT+ Network and is a joint initiative in partnership with the Student Union, Buildings and Estates and the EDI Unit.

As part of the ceremony, the LGBT Network also bestowed lifetime membership on Cathal Kerrigan and Dr Joan McCarthy in honour of their trailblazing work establishing the first LGBT+ Network in any university in Ireland.

The speeches including those from the President, the LGBT+ Staff Network and the LGBTQ Society, are available here. 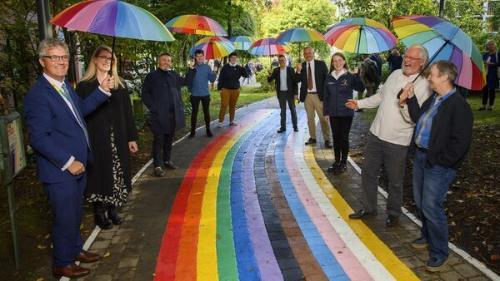 We also hosted a Coming Out Day panel discussion with seven members of Ireland's national and local LGBTQ+ community networks/organisations including LGBT+ Ireland, TENI and National Federation of LGBT Networks. The recording is below for anyone is looking for more information on coming out now or in the future.

The UCC Quad was lit up in rainbow colours this week and the new Progress Flag was flown. For this first time, the Library has been decorated in a rainbow decal to help highlight the campaign.

What do the colours mean?

The pride walkway colours each hold a different meaning, and each colour represents an important value of the LGBTI+ community.

The design is based on the Progress Flag. To find out more about the origins and evolution of Pride Flags see:

How did the Rainbow become a Symbol of LGBTQ Pride?

Origin of the Black & Brown Stripes

Origin of the Intersex Inclusive Flag