The Art of Air Pollution

The Art of Air Pollution

Every year the United Nations organises a World Environment Day to raise awareness in a particular area of environmental concern. This year the theme is Beat Air Pollution and the Day is 5th June.

To mark the occasion the Centre for Research into Atmospheric Chemistry (CRACLab) at UCC has selected five iconic images that reflect our understanding of matters controlling air quality. The success stories (acid rain and ozone depletion) are clearly environmental problems in which scientists, politicians and the general public acted as one and for the same positive outcome. These victories give hope that we can defeat the inter-connected worldwide problems of air pollution and climate change. A solution has been proposed by scientists and that is to keep carbon in the ground. Unfortunately, this advice has not yet brought politicians or the public on board. And so the only way to proceed is for scientists to raise awareness about air pollution in a user-friendly way to decision makers. And that includes you too.

This mini-exhibition is our way of reaching out to decision makers and the general public about the ways in which we have defeated some of our previous environmental challenges and to give hope that if we all row the boat in the same direction then we can win the tough battles associated with the climate emergency.

You can view The Art of Air Pollution and related videos, podcasts and blogs at crac.ucc.ie or contact Prof. John Sodeau and Prof. John Wenger 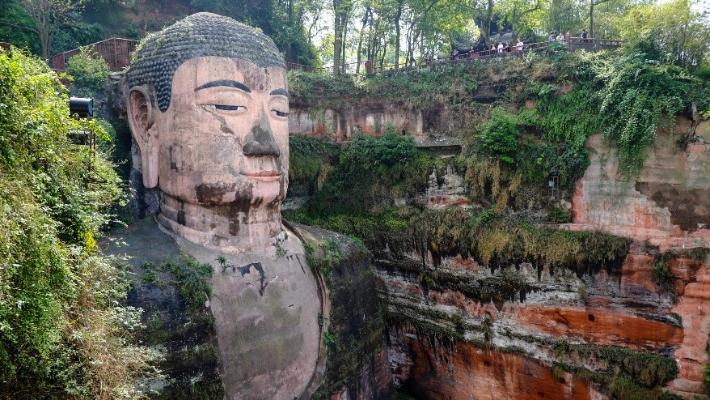 This statue is located in China’s Sichuan Province where construction started in 713 AD. It is being renovated at great expense after many years of damage from acid rain. But continuing economic growth in China has led to increasing amounts of air pollution from transport and coal-burning. As a result, their emissions of sulfuric and nitric acids have continued to attack the calcite (calcium carbonate) mineral of the natural cliff stone that the monument is carved from. The cracks and visual degradation appear because the acids and related acidic ions dissolve the carbonate content. The term acid rain was first coined in 1872. It increasingly became a serious health problem during the famous London fogs or “peasoupers” up to the mid-1950s.  Understanding of the detailed chemistry came in the 1960s and 70s and, in Western Europe at least, the problem has been much reduced because of this research and the “Green” environmental activism that followed. 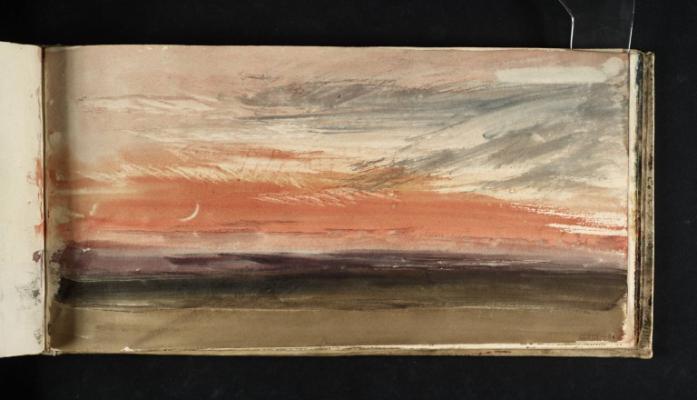 JMW Turner’s “Red Sky and Crescent Moon”, housed at the Tate, was painted in about 1818 just three years after the largest volcanic explosion in human history (Mount Tambora on the Island of Sumbawa, Indonesia). The eruption released many small sulfate particles into the atmosphere that gradually spread around the planet over the next year. In fact there were so many particles that much of the sun’s light and heat was prevented from reaching to the Earth’s surface because of reflection and global dimming in the atmosphere. This phenomenon led to 1816 becoming known as the year without a summer. It also led to some spectacular red sunsets because the particles scatter blue wavelengths of light more efficiently thereby allowing the red light from the Sun to reach our eyes from the horizon. This type of behaviour has been captured on many occasions by painters like Monet and Munch (take another look at The Scream). Now you can see why many geo-engineers think that seeding our atmosphere with sulfate particles might combat global warming... but that’s another story. 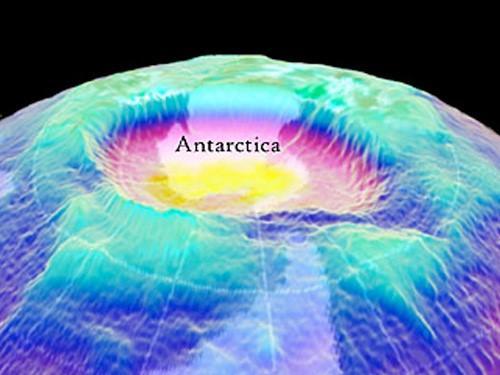 This satellite image was obtained by the NASA Total Ozone Mapping Spectrometer (TOMS). It is centred on the South Pole where the so called ozone “hole” was first observed by the British Antarctic Survey in the mid-1980s. This was in fact achieved through measurements from the land base at Halley Bay using a device to measure ozone UV absorbance. At first the results were not believed because of the speed of the ozone depletion during October (a month into the Austral Spring). Associated NASA satellites were originally programmed to ignore “anomalies” and it was not until the scientists began to look at all of the retrieved data that it was recognised as a real phenomenon. All of the ozone is never completely removed and so it is not a hole….but very large decreases (up to 75%) have been observed. The reason for the rapid depletion in springtime was quickly related to the presence of chlorofluorocarbons (CFCs) in the atmosphere, combined with sunlight, polar stratospheric clouds and a polar vortex. The chemistry is more complicated than that happening for global ozone depletion but is now well understood. And the good news is that the ozone layer is repairing itself because we have banned CFCs. 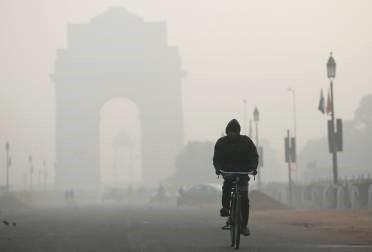 This photograph was taken in January 2019 at a time when the chief minister of the region called New Delhi a “gas chamber”. Actually, gases like ozone and the nitrogen oxides are only part of the story. A large part is made of very small solid particles and droplets floating in the atmosphere. They are often called particulate matter (PM) and are defined by their sizes, which are so small that for some of them more than 100 can sit side by side in the width of a human hair. They are readily breathed in and can be toxic, often consisting of acids, carcinogens and heavy metals. PM is produced from transport (cars, trucks, buses and ships) and burning solid fuels like coal and wood. They can cause death and diseases like diabetes. The list of health effects associated with urban smog is becoming increasingly long and the picture above is not pretty. Can you imagine it if you were on the bike? The most important take away message though is that even at very much lower levels of air pollution than depicted here, the PM can be harmful especially to the young, the old and those suffering from asthma. Furthermore, these black, sooty, carbon-containing particles lead to global warming because they take up the heat trying to escape the planet’s surface. Reducing smog levels will therefore be a win-win scenario in our efforts to combat both air pollution and climate change. 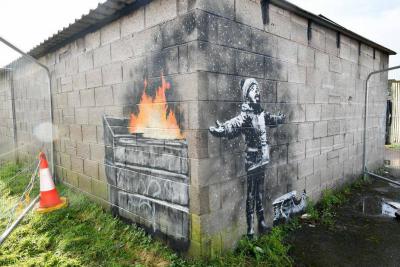 Revealed during Christmas 2018, Banksy’s famous Season’s Greetings mural in Port Talbot, Wales, uses the corner of the garage to convey a chilling message. When seen from just one side of the building, the art appears to show a boy catching snowflakes on his tongue but, on turning the corner, it becomes clear that the snow is actually ash produced from a fire in a skip. This painting is a strong statement on the industrial town's steelworks and the pollution it creates. Steel plants are known to emit acidic gases like nitrogen dioxide and sulfur dioxide, as well as fine particulate matter which, like the ash shown in the picture, can contain toxic chemicals such as heavy metals and dioxins. Studies have shown that people living near steel plants are more likely to suffer from respiratory diseases like asthma and have higher blood pressure and resting heart rates. More worryingly, evidence is emerging from several places around the world that residents in steel towns have a higher incidence of several forms of cancer. The best way to deal with industrial pollution is for the environmental agencies to impose strict regulations on emissions and perform regular checks to ensure compliance. 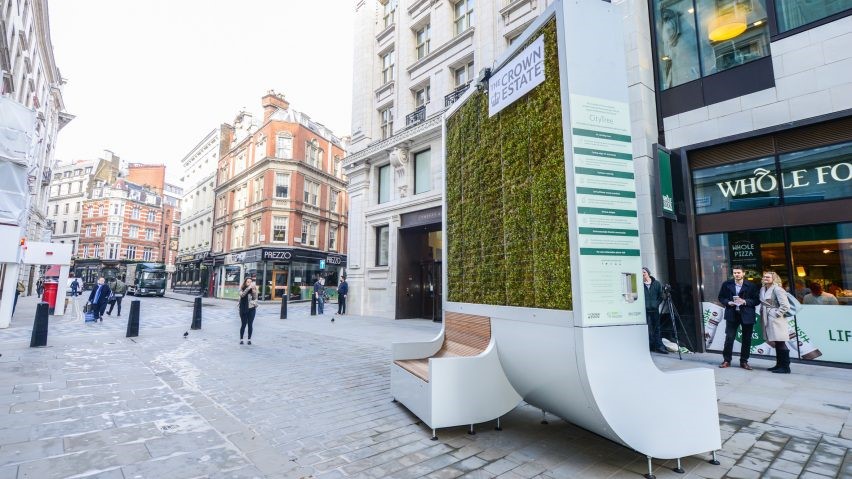 This moss-covered living wall/street bench is of an entirely new design and technology. It is manufactured by Green City Solutions in Germany. The one shown above has been installed recently near Piccadilly Circus in London. It has an air-purifying capability of 275 natural trees and is said to reduce harmful particulate matter (PM) air pollutants by up to 30%. It also looks good. Most importantly you can take a welcome break from shopping and theatre-going by sitting down on its seat! 9000 premature deaths have been ascribed to air pollution in London and this is just one of the innovative approaches that are currently being tested to improve air quality there. This mitigation effect is not the answer though to our air quality problems in urban areas; it simply reduces the effects rather than eliminating the exhaust or chimney emissions at source.

Centre for Research into Atmospheric Chemistry