This CPD course is no longer running.

This Music Teachers’ CPD course is unique in Ireland in focusing on the development of teaching and learning approaches to Early Music performance and listening for post-primary level. Led by professional practitioners in Early Music, the course will explore the history, performance conventions and creative interpretation of early music genres such as plainchant, Baroque vocal music, and instrumental performance practice in the Medieval, Renaissance and early Baroque periods. Early Music performance repertories and techniques will be carefully selected to provide an accessible, developmentally appropriate entry point into these historical classical music performance styles, for beginner and near-beginner performers of all ages. Critical listening, leading practices, interpretation of score, and a basic introduction to improvised harmony and ornamentation practices for young performers, will specifically meet many of the teaching and learning criteria outlined across the post-primary curriculum for Music. The course may also be of general interest to private music teachers and Early Music enthusiasts.

The two days of workshops will be framed by public concerts performed by the course tutors, at St Peter and Paul’s Church, Paul’s Street, Cork.
Biographies of Performers & Teachers:
Daniel Brielmaier (Baroque oboe/flute)

Toronto-based musician Daniel Brielmaier performs on both modern and period wind instruments.  He received a BA in Music Performance from the University of Wisconsin-Madison, where he studied modern oboe with March Fink.

After a receiving an introduction to Early Music through the Department of Music at University College Cork, Daniel returned to Madison and began studying traverso and recorders with Jeanne Swack, as well as viola da gamba with Jennifer Barron and David Crook.  Relocating to Toronto, Canada for graduate studies, he studied Baroque oboe with Washington McClain and John Abberger.

Daniel regularly performs with modern and Baroque orchestras and chamber ensembles in the US and Canada, and has taught several musicology courses and workshops on Baroque music and performance.

Jan Kleinbussink is a renowned senior early music specialist in the Netherlands, organist and harpsichordist was head of the Early Music department at the Royal Conservatory in The Hague for over fifteen years.

He also developed the master's programs in the field of performing arts and the academic artistic research programs at this institute. He continued this work as a coach for students Early Music research at Leiden University.

As a continuo player on organ and harpsichord he has been working with Ton Koopman and the Amsterdam Baroque Orchestra and Choir for decades in many concerts throughout Europe, America and Japan and in many CD recordings with works by Bach, Handel, Charpentier, Purcell among others.

He currently gives concerts as a soloist and leader of the Dutch Baroque consort and gives lectures, courses and masterclasses in Early Music. As a guest conductor, he leads Early Music Productions with various ensembles. 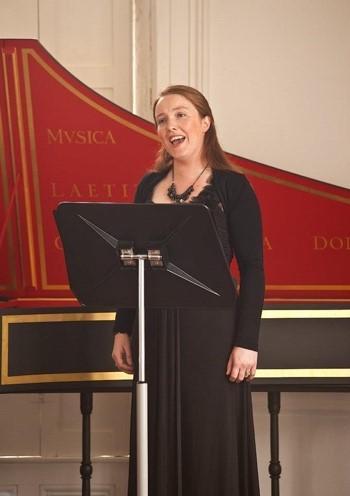 Irish soprano Róisín O’Grady has performed in recital and oratorio throughout Ireland. She was a member of and a soloist with the National Chamber Choir of Ireland for over two years. She performed with the choir throughout Ireland and toured Holland and The Lebanon. In 2011 they performed for US President Barack Obama in the White House on St. Patrick’s Day.

She has performed with early music ensembles, orchestras and choral societies throughout Ireland and the UK including the RTÉ National Symphony Orchestra, the RTÉ Concert Orchestra, the BBC Scottish Symphony Orchestra, the Irish Baroque Orchestra and the Orchestra of St. Cecilia. She is a member of the early music duo tonos who performed in the John Field Room, NCH, the National Gallery of Ireland, the Sligo Festival of Baroque Music, and was broadcast in concert by Lyric FM. The duo has released two CDs, Songs of Identity and Belonging and Wintersong. She regularly performs with harpsichordist Malcolm Proud.

Eimear also performs with a number of sound art ensembles such as The Quiet Club, Strange Attractor and has written muisc for Gaitkrash theartre company's latest production "Killing Stella" Eimear was a recipient of the Arts Council 2018 music project award to compose a piece for solo cello and found sounds.

The Dutch Baroque cellist and viol player Marike Tuin started her Baroque music studies when she was studying at UCC in the Socrates exchange program in 2000. She met the American viol player Sarah Cunningham in Cork and started her viol studies. On Baroque cello she made a start with Cork-based Dutch cellist Gerda Marwood-Bollekamp. Back in Holland she studied at the Early Music departments of the conservatories of Amsterdam and The Hague. In her study-time she learned a lot from great musicians like Jordi Savall, Philippe Pierlot, Monica Huggett, Jaap ter Linden and Michael Chance. In orchestras she worked with a.o. Gustav Leonhardt, Philippe Herreweghe and Jos van Immerseel.

After finishing her studies she has been performing as a Baroque musician in ensembles and orchestras throughout Europe. She is a member of the Margaretha Consort, with whom she made a highly praised CD for Naxos with German 17th century Christmas music, ‘A German Christmas’.

Marike regularly teaches viol consort courses in The Netherlands and Germany,  and recently gave a masterclass in Baroque cello at the Cork School of Music as part of the 2017 East Cork Early Music Festival. She also likes to work with Alzheimer’s patients, with whom she does improvisation workshops.

Details on the location of the course will be provided on registration and payment for the course, but it will be held on UCC Music Campus aswell as other concert venues.

On-street parking is available close to the university, and there are several options for pay-parking nearby:

How Do I Apply

This course is no longer running.

If you are interested in any CPD courses in the area of Music and/or Theatre Studies please register your interest on the Mailing List form below: