Chief of Defence of the Irish Defence Forces 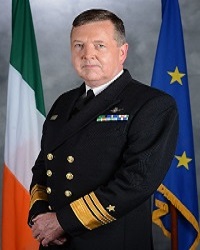 Admiral Mark Mellett has over 39 years’ service as an officer in the Irish Defence Forces.  He is the first naval officer in the history of the Irish State to serve as Chief of Defence, having previously served as Deputy Chief of Defence and Chief of Navy. He commenced his military career as an army reservist, before being selected for a naval cadetship in the Permanent Defence Forces.

For over two decades he has been a change leader, contributing to ongoing transformation and positioning the Irish forces in a post-modern setting.   As Deputy Chief of Defence he led the Military input to the 2015 White Paper for Defence and on appointment as Chief of Defence, in partnership with Government, he quickly stood up implementation of over 80 major projects driving transformation. During the same period, Admiral Mellett led the Irish Defence Forces’ adoption of NATO’s OCC E&F and Standardisation frameworks.

Admiral Mellett has extensive experience at home and abroad, including in Afghanistan and Lebanon, in combined and joint operational missions. During his service at the Divisional HQ in Kabul with ISAF, he conceived and drove the development of a ‘cross cutting’ framework between Afghan Officials, Coalition Forces, NATO/ISAF Forces and the UN.  His capacity to act as an ‘honest broker’ proved highly effective in attaining unity of effort among disparate stakeholders in complex scenarios. As a specialist Naval Diving Officer and Commander of three seagoing commands, Admiral Mellett participated in and led numerous counter terrorism and counter narcotic operations, often in very challenging sea conditions. He was the second Naval Officer in the history of the Irish State to be awarded “The Distinguished Service Medal (DSM)” by the Irish Government for his leadership of a complex maritime narcotics interdiction operation.

Admiral Mellett is a champion of internal and external organisational diversity.  He led the introduction of a Diversity and Inclusion Strategy in the Defence Forces (the first of its kind in the Irish Public Service), which focussed on gender, culture, creed, age and sexual orientation.  He is a strong advocate of external networks and partnership with other militaries, state bodies, research institutes and enterprise. He was co-founder of the Irish Maritime and Energy Resources Cluster, an innovation partnership between the military, academia, and enterprise, which received the Prime Minister’s Public Service Excellence Award in 2012. The Cluster fuelled capability development within the military while facilitating academic research, new company spin outs and job creation.

Holder of a Doctorate in Political Science and a Masters in Government and Public Policy, Admiral Mellett has a keen interest in research with a focus on European security, innovation, diversity and values-based leadership.  He has been a member of the European Security Research Innovation Forum (ESRIF) and has completed the EU Senior Mission Leaders Course.  He has also been a Visiting Professor abroad in Liverpool Hope University and is currently an Adjunct Professor of Law at University College Cork. He was the distinguished top graduate of each of the senior command and staff courses he attended at the Irish Military College, the US Naval War College and the UK Royal Naval College Greenwich, also receiving awards for the best research projects.

A former Naval Diving Officer, he continues to maintain a high level of fitness and is a daily runner.  He is married to Liz for 31 years and has two boys and two girls, with ages ranging from 15 to 28.