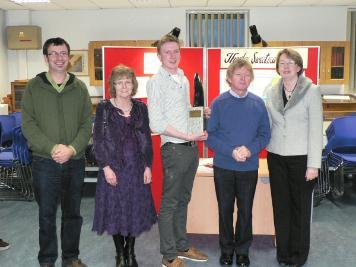 At a ceremony held recently at the School of BEES, Vince Twomey was awarded the Thorley Sweetman Prize for 2012. The award is presented for "best geological mapping project of 2011".

The late Dr. Thorley Sweetman was a postgraduate student and subsequently a staff member of the Department of Geology from 1979 to 1989. To mark his significant contribution to the department, his family, colleagues and students have provided for an annual prize for the best BSc (Hons) Geology mapping project.

Vincent was also awarded the Cunningham prize by the Geological Survey of Ireland for his project entitled "The Geology of the Ben Arnaboll area of Sutherland, UK". The Cunningham prize is awarded for the best field Honours mapping project submitted by an undergraduate in Geology in Ireland.  Vince is now studying for an MSc in Simon Fraser University in Vancouver.