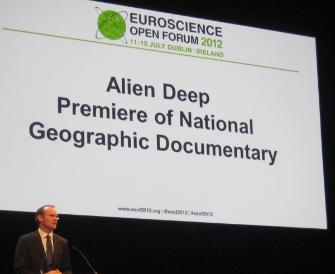 Alien Deep will be broadcast in Ireland in late September and follows Bob Ballard (of Titanic discovery fame) as he explores the deep ocean. Episode 3 focuses of the origin of life in deep volcanic centres on the ocean floor.  The marine expedition of discovery undertaken by Dr. Andy Wheeler, Head of Geology in the School of Biological, Earth & Environmental Sciences and his Irish/UK team, features heavily. This expedition made a new discovery of a hydrothermal vent system (so-called black smokers), the only between Iceland and the Azores, at 3000m water depth supporting bizarre lifeforms and towering chimneys of ore-grade metal sulphides.

Minister Coveney commented on the world-class achievement made by Irish scientists using the national research vessel and remote controlled vehicle and remembered how he shared the palpable excitement with team when they returned to Ireland last summer.