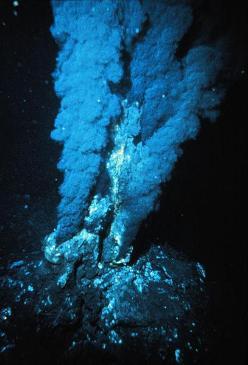 UCC and BEES research has led to discoveries in the mid-Atlantic Ridge, which will feature in a National Geographic programme to be broadcast this Sunday, 28 October.

National Geographic has produced a five part series, The Alien Deep, which takes viewers into underwater worlds where no human has gone before.

The series takes viewers into an underwater world 3,000m deep, where, on the slopes of the Mid-Ocean ridges that divide the earth’s tectonic plates, chimney-like formations spew black plumes of superheated water, packed with chemicals, minerals and dissolved gases allowing life to thrive against the odds.

The scientific team leader was Dr Andy Wheeler, School of Biological, Earth and Environmental Sciences at University College Cork who worked with scientists from the National University of Ireland Galway, Geological Survey of Ireland, the University of Southampton and the National Oceanography Centre in the UK. “It's great to see Ireland's expertise recognised on TV”, says Dr Wheeler.  “Discovering a new volcanic landscape three kilometres below was a thrill.”

The scientists were on board the Irish National Research Vessel, Celtic Explorer and used the Remotely Operated Vehicle Holland 1 for their explorations of the deep and was supported by the Marine Institute under the 2011 Ship-Time Programme of the National Development Plan.

The team named the previously uncharted field of hydrothermal vents along the Mid-Atlantic Ridge, the first to be explored north of the Azores, the Moytirra Vent Field.  Moytirra is the name of a battlefield in Irish mythology, and appropriately means ‘Plain of the Pillars’. Patrick Collins from the Ryan Institute, NUI Galway led Ireland’s marine biological team on the survey.

The programme featuring UCC scientists will be broadcast this Sunday 28th October at 6pm on the National Geographic channel on Sky (channel 526) and also UPC (channel 215). The programme presenter is explorer Dr Robert Ballard who discovered the wreckage of the Titanic in 1985.

For more on this story, see the Irish Examiner report here.