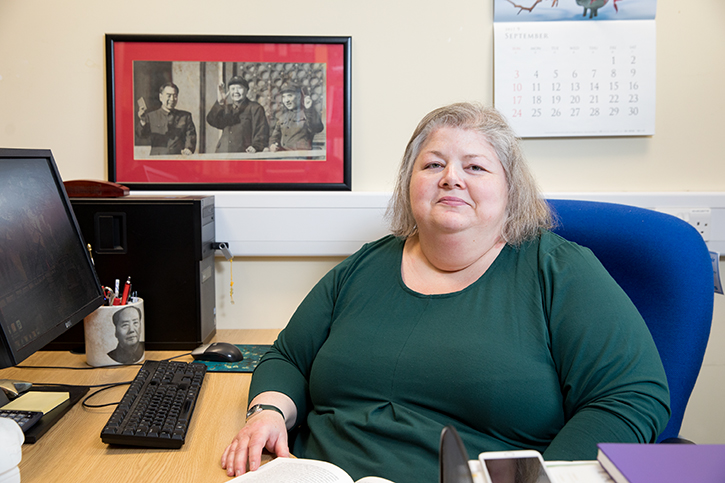 The eminent Asian Studies scholar and human rights champion Professor Jackie Sheehan has died aged 51. Professor Sheehan joined the School of Asian Studies at University College Cork in 2013, having spent the previous ten years in the School of Contemporary Chinese Studies at Nottingham University. With a BA in Chinese Studies from the University of Cambridge (Corpus Christi College) and a doctorate in Chinese history from the University of London (School of Oriental and African Studies), she went on to publish widely and authoritatively on state-enterprise reform, employment issues, industrial relations and labour protests in China; the Cultural Revolution and the democracy movement; Chinese migrant workers in the UK; and human trafficking between China and the UK.

Among her most important publications were the ground-breaking books Chinese Workers: A New History (1998) and China’s State Enterprise Reform: From Marx to the Market (2007), both of which have become essential points of reference for students of China’s economic and industrial development. At the time of her death Professor Sheehan was preparing a third book, a much awaited history of the Cultural Revolution, provisionally titled Long Live the People.

Although, in the decades since leaving Cambridge, Professor Sheehan developed a varied set of research interests, there was a common thread – examining the ‘contradiction’ (one of her favourite words) between the PRC’s constitutional guarantees of civil rights and the difficulty citizens have always faced in trying to enforce them in practice. It was this that united her early work on labour protest under Chinese Communist Party rule with later interests in the development of the democracy movement and its Cultural Revolution origins, and in researching a whole range of marginalised and persecuted groups and individuals in China today. Indeed much of Professor Sheehan’s recent work focussed on members of ethnic minorities punished for their expressions of identity; worshippers under pressure from government plans to eradicate their organizations; parents who have fallen foul of family-planning systems; and the careers of rights defenders and the emergence of the New Citizens Movement.

During the last decade of her life scholarly interests in the experiences of Chinese migrants abroad were coupled with extensive pro bono work as an expert witness in asylum tribunals and criminal cases involving Chinese nationals, work that made her an authority on human trafficking between China and the EU and the social and economic forces that drive it.

Finally Jackie Sheehan was not only an eminent scholar and champion of human rights, but also incredibly good company and an excellent companion on the many fieldtrips we made to China together in the 1990s and 2000s. Equally at home in the rugby stadium as the lecture theatre, she loved good sport, good wine and good food. Indeed our last meeting was typical – a research seminar followed by a rugby match at Cork Constitution, a meal at Café Paradiso and drinks at Reidy’s Wine Vaults.

A brilliant scholar, inspirational teacher and caring colleague, she was the brightest and the best – a great loss.

What first attracted you to your academic discipline?

It was a dim awareness that I was missing some of the most interesting parts of the last 200 years by knowing almost nothing about China, and the desire to learn a non-European language.  Plus I read the only book my local library had on China, which happened to be one of the best ever written, Jonathan Spence's The Gate of Heavenly Peace.

How were you drawn to your current research interests?

I'm working on human trafficking between China and the UK.  I've always had a strong interest in human rights in China, so I started serving as an expert witness for Chinese asylum applicants in the UK, and very soon I found I was being asked to deal with a lot of trafficking cases.  Once I realised how common it was, but how little understood, I got hooked on the subject.

What professional achievements do you consider particularly rewarding?

Often it's the things that go beyond an academic audience.  My rst book (from my PhD thesis) was important academically, but it was also used by the foremost labour-rights NGO in Hong Kong, headed by a 1989 Democracy Movement exile, to bolster the prole of the independent workers' movement in China.  I'm proud the work was of use to the people it was about.

Have you had professional role models? What impact did they have on you?

Not so much early on, but a conversation with a top female barrister a few years ago (when we were working together on an asylum case) made a big impression on me.  In court, the opposition lawyer will always try to disparage and downplay the expertise of an expert witness, and if you're naturally a bit self-deprecating, you can fall into their trap.  She said to me, you've been invited to present your work at Chatham House, you're consulting for the Foreign Oce and the Serious Organised Crime Agency - that should be on the rst page of every report you write.  "Make them take you seriously!"

What aspects of your work do you find most rewarding?

Getting students hooked on China, and in particular taking them to China if I get the chance - showing works better than telling, and I love watching them mentally tear up everything they thought they knew about China and re-form their ideas with each day's new experiences.