The Prehistoric Barrows of Co. Limerick 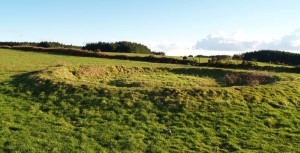 With over 3000 examples, barrows are the most common prehistoric monument on the Irish landscape. The barrow tradition began in the Neolithic and continued into the early medieval period. Barrows are generally defined as circular enclosures of earth and/or stone. The enclosing feature is often a bank and ditch but there are examples without either, consisting of a simple mound. The interior can be a flat platform or a shallow depression but the most common type in Ireland is the ring barrow which has a low mound that gradually rises from the enclosing ditch. Ring-barrows generally range in overall diameter of 15m to 25m (Waddell 1998). Excavations indicate that these were primarily funerary monuments. The central mound often conceals a shallow pit where cremated or unburnt bones have been placed. While many barrows contain a single cremation there are examples which show repeated use over time such as tumulus 8 at Carrowjames, Co. Mayo, which contained 25 cremations (Raftery 1941). There are also examples of barrows which contain little or no remains which is the case for 19 barrows excavated by Ó Riordáin (1936) in Lissard Co. Limerick. A number of barrows occur in cemeteries. Barrow cemeteries can range in size and often appear along with other monuments. Some of the largest barrow cemeteries are located in Co. Limerick. Elton townland, in the southeast of the county contains 39 ring barrows in an area measuring only 300m east to west.

This project is a study of the barrows of Co. Limerick and how they fit into the prehistoric landscape. Limerick contains approximately 900 barrows- almost a third of the barrows in Ireland. The majority of these barrows are concentrated in the south east of the county, an area dense with barrow cemeteries. The number of barrows involved in this project requires that remote sensing and analytical GIS will play a key role. Currently I am reviewing aerial photographs from the Bruff area of Limerick to help identify areas that will require field survey.