The generosity of our anatomical donors is marked by a specially commissioned sculpture by the acclaimed Polish artist  Alexandra Wejchert. It is an abstract piece in the form of a flame.

It represents the flame of knowledge which leads to the light of understanding.

This flame sculpture is located at the entrance to the FLAME laboratory in the Department of Anatomy and Neuroscience, in the  Western Gateway Building in University College Cork. The FLAME laboratory takes its name from this special commerative piece, FLAME is an acronym for Facility for Learning Anatomy Morphology and Embryology.

The sculpture Flame was commissioned in 1995 by the then Professor of Anatomy, Professor John Fraher, in recognition of the altruism of those who donate their bodies for medical education and research.

Alexandra Wejchert (1921-1995) was born in Poland, she held degrees from Warsaw University (architecture) and from the Academy of Fine Arts, Warsaw. After living in Italy and France, she moved to Ireland in 1965 and became an Irish citizen in 1979. Working firstly as an architect and artist, she then moved on to sculpture and her works quickly became emblems of the new Ireland that emerged in the 1970s. She experimented with innovative synthetic materials and embraced a cool, architectural abstraction that gave her work an international flavour. Her later works were primarily stainless steel and bronze sculptures in a range of flowing, organic forms.

In 2000 Flame, by Alexandra Wejchert was selected for inclusion in the Irish Artists' Century exhibition at the Royal Hibernian Academy in Dublin. The exhibition included one key work by each of 100 major artists who worked in Ireland in the last century. This recognition was especially welcome. It was the artist's last piece and she considered it her best.

The Flame sculpture was originally located in the foyer of the Department of Anatomy in the Windle Building. It has been relocated with the Department to the Western Gateway Building where it is positioned at the entrance to the The FLAME Laboratory which takes its name from this special commerative piece, FLAME is an acronym for Facility for Learning Anatomy Morphology and Embryology 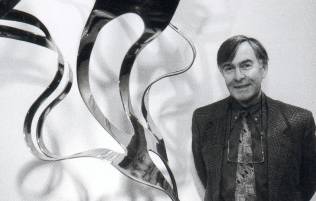