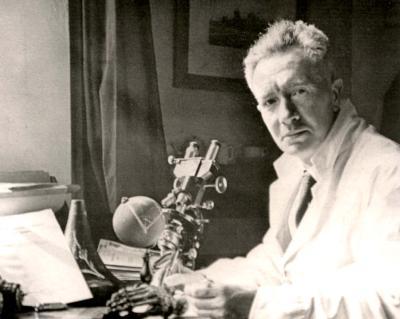 Michael Aloysius MacConaill was born on 27 July 1902 in Ballymena, Co. Antrim the eldest of five children; his father was a merchant and his mother was a mezzosoprano. He was educated at St Mary's School in Belfast. In 1919 he entered Queen's University Belfast Medical School, and completing a B.Sc. in the Anatomy Honours School in 1922. In 1929 he obtained an M.Sc from Queen's University Belfast, and became a demonstrator in Anatomy there. He was awarded the Queen's University Travelling Medical Studentship for 1929-30 to University College, London. He was a lecturer in Anatomy in the Anatomy Department at Sheffield University, and in 1942 he was appointed to the Chair of Anatomy at University College, Cork (1).

He revitalised the Department’s teaching and research, collaborating with Edward Gurr to develop tissue staining methods, with Eric Scher on the geometry of the dental arcades, and applied Boolean algebra to neuronal networks (2).

He was elected a Member of the Royal Irish Academy in 1945 and awarded a DSc by the Queen’s University of Belfast in 1950 and an MA by the National University of Ireland in 1964 (1).

MacConaill was one of the most prolific scientists in mid 20th Century Ireland. He published a great number of scientific articles and invited book chapters, and co-authored two highly regarded books: ‘Synovial Joints: Their Structure and Mechanic’s  and  ‘Muscles and Movements: A Basis for Human Kinesiology’. His work on the mode of lubrication in synovial joints is still widely cited as is his research into generalised methods for describing and analysing the motion of joints. It is perhaps an indication of his reputation that was asked to contribute the chapter on human joints to the 15th Edition of the Encyclopaedia Britannica (2).

MacConaill  had a uniquely original and divergent mind. He was an enthusiastic Lecturer and presented his subject with unique flair and originality. He was a linguist, he had a comprehensive and detailed knowledge of at least eight languages, all of which he spoke fluently. He had a particular enthusiasm for Irish. He had a deep interest in theology and philosophy and a lifelong interest in literature and a deep and generous sense of humour (1).

He was active in the Irish Red Cross, and was Commandant of the First Field Ambulance Company of the local defence force in Cork and following a devastating outbreak of polio during the 1950s co-founded the Cork Polio and General After-Care Association.  He played a distinctive and prominent part in all aspects of academic life at U.C.C. His debating skills were legendary and he was a frequent participant, even after his retirement, in meetings of the College's Philosophical Society.  He retired from his position of Professor of Anatomy in 1972 and died in 1987 (1).

The family of the late Professor Michael A. MacConaill, in recognition of his outstanding and original contributions to knowledge of the functional anatomy of the locomotor system, wish to perpetuate his memory by establishing an award 'The MacConnaill Prize', and have made a donation to the University for this purpose.

Prof. M.A. MacConaill’s activities in the War of Independence (and later), are recorded in his Witness Statement to the Bureau of Military History in 1951.  It is a fascinating account of his medical role as a member of the Belfast IRA, sometimes under fire, during the years 1919-1921:

Michael MacConaill was Prof. of Anatomy here from 1942 to 1973.  In addition to his consultant and academic appointments, he was also a member of the Defence Forces reserve (An Forsa Cosanta Aitiula) and held a formal military medical appointment in his specialism.  He would, as a result, occasionally lecture our students here in military uniform! When in uniform, on occasions he had to pass the Cork Jail Memorial (near the then Medical Building – now the Windle Bldg.), and the graves of the IRA members buried there - he would be seen to face the memorial, salute and march smartly away.

They were, of course, his comrades as members of the Old IRA.

Another glimpse into UCC’s past, which I hope you find interesting.